The Princess is in Another Castle

Remember here when I said I preferred being a peasant over a princess? I guess I'm a giant liar. I would say the Halloween of 2004 was the most fun I ever had getting costumes together. This was the year that started my amazing goodwill luck. I said, "I need a poofy short sleeve pink princess dress" and my mom said, "Where are you going to find something like that!?" I walk into the Harrisonburg Virginia Goodwill and it is in the window. Perfect. Why did I need a pink princess dress? This is why.

These days, it seems Mario gang costumes are everywhere. I swear that in 2004 I had rarely seen them done and they were typically just Mario and Luigi. This next picture is going to blow your mind. We not only had Mario, Luigi, and Princess Toadstool. We also had Toad and Wario. Eat your hearts out. 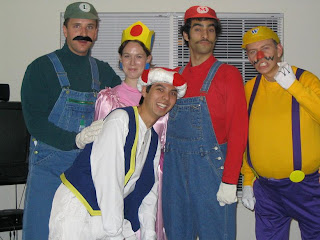 Mind blown right? I think we were amazing. Let's look at some facts. Here are the stupid off the shelf costumes out there...

What is going on in these? Seriously, a sexy Princess Toadstool? Who thought that was a good idea? That Mario hat doesn't even have an "M" on it. How are we supposed to know who he is? A chin strap for Toad's hat? That's so 3rd grade. The Wario one is all right I guess. At least he has the "W" on his hat.

Let's look at Toad in real life. And by real life, I mean video games, which I guess is not real life at all. Now I'm confused. 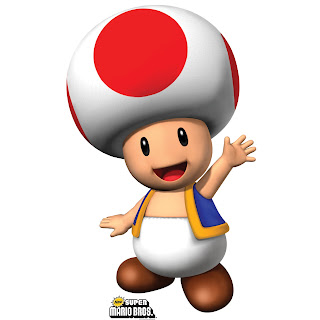 Jesse was a champ. He went from no costume whatsoever the day before to perfect Wario the night of the party.

Complete with red nose, crazy mustache, and W gloves. He's even got the "I'll get you" fist down. 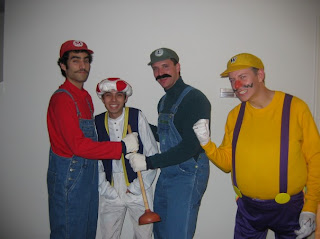 Their hats were actually white painter's hats that I dyed and then ironed on patch letters. Shirts and overalls courtesy of Goodwill.  Why are they holding a plunger? I would like to remind you that Mario and Luigi are plumbers. There is a reason for all those pipes. If you don't remember this fact, watch the TV show. After watching that, I'm 99% sure they should have learned that little dance.

I really wish I had taken pictures along the way, because the step by step transformations were spectacular. My crown, earrings, and broach are all painted cardboard. Most likely from beer cases considering the year. I made the dark pink hip poofs (there has to be a technical term for that) from fabric, cotton batting, and safety pins. We're going for authentic here and princess has dark pink hip poofs. If you don't do that then you are wrong. 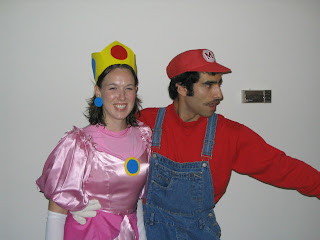 If we had another girl then Luigi could have had his princess too :( 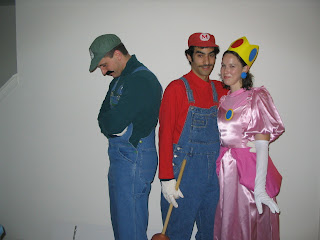 But my favorite part of the evening was all the JMU cops. We'd walk by and they'd say, "Heeeyyyy MARIO!!" and then let us do whatever we wanted while everyone else got in trouble.
Posted by Ashley: The Greek Wife at 4:00 AM

Here is what the people read...

Ashley: The Greek Wife
New posts most Tuesdays! I write about whatever I want. Funny stuff that happens, things going on around the house, and life with Multiple Sclerosis.